The Kitty contract doesn’t align with the 721 standards and there were issues with this process, however those issues with the contract are now fixed and you can (request) mint your kitties through Etherscan (while the frontend updates are made).

This week the build has continued on the Vault Creation and Vault Management screens, with particular care being taken to allow for the changes coming in V2 to be added once they get deployed. If you’re keen to see the new contracts, keep reading further below (V2 Contract Testing).

We continue to see an increase in usage of the platform thanks to the new UI, here’s a list of the movers for the past week.

We are in beta testing for the final updates to the app and expect to be pushing that later this week provided there are not any major hiccups in testing.

The work on the V2 contract is done and has moved over into the Code Area repositories for the competition which starts in just over a day — https://code423n4.com/

If you’re interested in learning about the new contracts this is a perfect way to do so and give yourself the chance to win some prizes for finding any potential issues.

If you missed out on the NFTX Governance call last week you can catch up with this post from our YouTube channel.

The next governance call will occur on May 5th at 16:00 UTC.

LarvaLabs have released their third project this week, Meebits. These are 20,000 unique 3D characters (think voxels) which were created by a generative algorithm.

Similarly to Punks and Glyphs, the first tranche of these could be minted for free however it was only to collectors that already had a Punk or Glyph in their wallet. Each of their previous NFTs then became a one off ticket to claim the third installment.

The cunning ones among you would have realised that the NFTX Vault holds more than 200 Punks and Glyphs, so anyone holding a token was able to redeem one of the punks from the vault, unwrap it, claim their Meebit, and then redeem it back into the pool to get their token back. Repeat.

With each Punk/Glyph only able to redeem a single Meebit, the random redemption process will mean that there’s probably still quite a few ‘tickets’ left, but at the moment there was no clear way to check which were still unclaimed.

Even if you don’t have a Punk or a Glyph, the public sale for the Meebits were available on a Dutch auction starting at 2.5ETH.  Within a few hours all of the public sale Meebits had been scooped up before the price got down to 2.4ETH.

The approach for an artist to reward current NFT holders of their previous work has been lauded on Crypto Twitter and there are sure to be more creators following suit in the future.

We already have a Meebits vault created with a couple of Meebits already joining the party.

The Financialization of NFTs

Dmitriy Berenzon covers off the role that NFTX has in the rise of NFTs and looking at Accessibility, Liquidity, and Utility. To deal with these we’ve seen the rise of platforms offering NFT exchanges, fractionalisation, and index funds.

A few months before the world lost Kurt Cobain in 1994, he had a final formal photoshoot with photographer Jesse Frohman. Now, as you’re reading these words, the images from that shoot can be purchased as an NFT on Frohman’s website.

Bidding will start at 27ETH and run between May 3rd and May 7th 6pm ET. In addition to the 104 iconic images, contact sheets, and polaroids, the auction winner will receive one print of their choosing from the collection and the opportunity for their own photoshoot with Jesse Frohman.

British Artist Lewis Capaldi is just as famous for his singing talent as he is for not taking himself very seriously. This NFT, sketched by Lewis himself, sold for 36ETH (~USD$113k) yesterday. There’s more that just the image though, with the winning bidder also getting access to every headlining show, invitation to hang out during album recordings, free tickets for secret shows, and a ⅕ pressing of the new album (plus more).

This trend looks like it will continue with the music industry providing experiences to their fans through NFTs, and keeping much of the profits themselves.

A new project went off with a bang this week and has gone to show that a bonding curve is probably not the answer. The project is a collection of 10,000 Bored Apes with 170 random attributes, and it managed to sell out while some of the NFT world was still asleep.

The initial sale was just 0.08ETH per Ape and it quickly found higher and higher floor prices.  The infamous Pranksy picked up 500 Apes and is partly responsible for the rise in the hype, along with a few other OGs.

Why has this been such a success? Well a low introductory price that is fair and consistent, along with some fresh looking artwork that you would probably hold onto regardless of the price action, have been keen to the success. 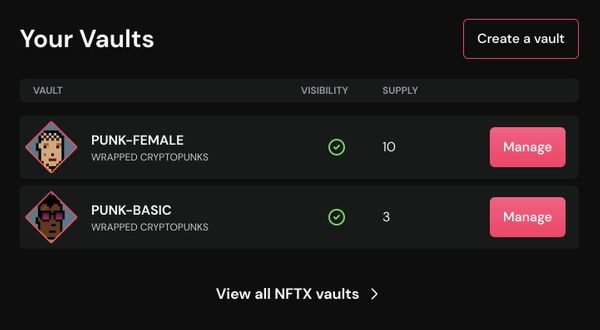 In the final step of our new app roll-out we’ve introduced a new UI for vault creation that allows any user to permissionlessly create a vault for any NFT. 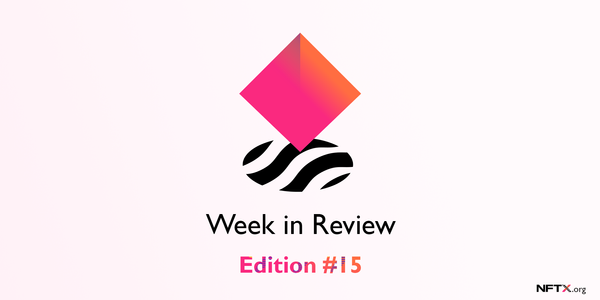