This week we’ve seen a continuation of new vaults created on the NFTX platform and adding to the already healthy supply on NFTs in the system.

New vaults added to the Gallery this week include:

Punkbodies is a project that has brought 10,000 bodies to match up with the existing 10,000 Punks. You are able to combine Punks and Bodies to create Punksters, which are available on their Punksters collection page. If you already own a Punk you’re eligible to get a free airdrop up until April 11th… then you might want to add to the vault.

Solos is a collaboration between Jeremiah Palecek and Dennison Bertram, a painter and a creative technologist respectively. These generated oil paintings are portraits meeting picasso meets monet meeting digital. There are currently 15 pieces in the vault.

DeafBeef is a lovely new audiovisual based NFT project which is aiming to push the limits of music/multimedia stored on the blockchain. The NFT’s are direct representations of the sound as it would appear on an oscilloscope, and they are generated based on the a random hash value at the time of minting which sets their tempo, timbre, pitch and time signature. There are only 128 minted with three in the vault.

POW is an online mining NFT (Proof Of Work). Once connected to their site you begin the mining process based upon the last successful mint. If another NFT is minted while you’re mining, you’ll need to start again. This adds to the urgency of minting once you find one…. because waiting too long will mean losing it and as the process continues the mining becomes more difficult and time consuming. The NFT’s themselves are based on the periodic table and are visualised with the electrons spinning around the atom.

If you’re ready to start your own vault you can get started now by following this tutorial, or alternatively reach out on the NFTX Discord.

The full agenda and summary of the last call can be found on our forums.

As some timezones have changed due to summer season, a reminder that the next Governance call will be held on April 7th at 16:00 UTC.

A huge week on the product development side of things with the internal beta testing period for The Minter coming to an end.

There are a few small UX issues and some generic contract bugs (e.g. NFTs that use the generic OpenSea contract) which are being fixed right now, along with the preparations to push the first phase of the new front-end live before the end of this week.

The feedback has been really positive and we thank all of our beta testers for spending time to go through the new process.

Keep your eyes peeled for the announcement on Discord and on twitter this week… who will be the first person to Mint using the new interface?

The artwork for the Founder cards was released this week with some rarities attached to the artwork. The Founder cards are made up from 5 layers of artistry in what is being called “Accidental Collaboration”. For each layer you will have either Common artwork, or a particular artist's work, and the rarest of these cards are PERFECT cards where each of the layers are by the same artist.

One of these cards were sitting in our Ether Cards Vault and it wasn’t long before someone with a keen eye snapped it up. But how did they get it from the vault?

Well they found two of the cheapest Ether Cards for sale on OpenSea and Mint/Redeemed until they randomly got the right card. Fortunately for them they got it on the second try, but based on the price for these perfect cards they had plenty of mints/redeems to go and still make a profit.

The sale ends in another two days, at which point the traits will begin to be pushed to the cards.  Will we also have one of the PUNK cards that entails the holder to one of twenty one CryptoPunks that Ether Cards have put aside?

John Cleese’s “Unamed Artist” picture of the Brooklyn Bridge sold for 17.7814ETH this week, and while it’s not fetching millions of dollars it equates to a little under USD$40k, especially seeing as Ethereum hit all time highs this week.

It was April Fools last week and there were some good lighthearted fun running throughout the internet.

One of our favorite pieces came from one of the developers contributing to the project, @Owen. While we’re seeing some people getting tired of the traditional bonding curve for NFT releases, Owen has come up with his own bonding curve, a sinusoidal bonding curve.

This week we saw Easter and the arrival of Generative Bunnies. These little bunnies are programmatically generated using differing backgrounds, body, head, face, eyewear, headwear, and extras.  With billions of possibilities, there are only 7,000 to be minted (currently 1104 have gone) 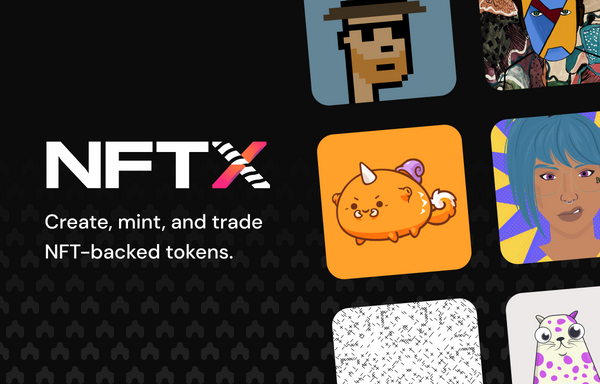 We’re extremely excited to announce the launch of a brand new UI for interacting with the NFTX protocol that implements a number of much-needed benefits for our users. 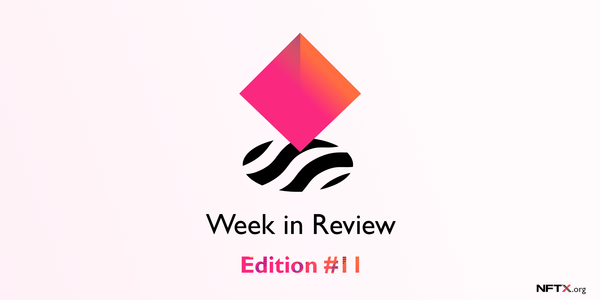