In this release post we’re diving into the soft-launch of NFTX v2, an upgrade of the original NFTX protocol, aiming to bring NFTX closer to becoming the primary liquidity hub for the NFT/DeFi ecosystem.

General changes which the second iteration of NFTX brings can be broken down into the following:

Note of caution: Before diving into each topic, please be aware that this release is currently in beta stage. While the protocol has been reviewed by Code Arena and multiple experienced Solidity devs, there are still smart contract risks involved. There is no rush or advantage to migrate quickly as rewards are turned off. Please do not risk any capital you can’t afford to lose in case of an exploit.

Version 2 can be accessed at v2.nftx.org.

Updating our focus and recommendations

Looking back at the past months of NFTX v1, we’ve learned that the current main value add of NFTX to the broader NFT/DeFi ecosystem is acting as an instant liquidity hub for people that want to sell/buy floor NFTs, while allowing inventory providers to capture trading fees of these NFT coins on AMMs.

NFTX version 1 was originally designed as a platform that focused on multi-layered NFT index funds. Since launching in December of 2020, we’ve realized that this multi-layer model suffers from long-tail, illiquid base (D1) funds (such as PUNK-ZOMBIE) causing liquidity and arbitrage issues for higher level (D2) funds which combine them.

With the release of NFTX v2, we are sunsetting the D2 fund model and focusing exclusively on simple D1 funds which we now call vaults. Moreover, we encourage communities to emphasize only a single vault per collection (e.g. Cryptopunks = PUNK, Hashmasks = MASK, etc.). Previously, with version 1, we encouraged multiple vaults per collection (e.g. PUNK-BASIC, PUNK-ZOMBIE, etc.). While this topic is outside the scope of this post, we believe it is better to have a single vault per collection to keep things simple, and that there are other ways of achieving liquid markets for non-floor NFTs (which we plan to explore as v2.x upgrades).

In addition, NFTX v2 will also focus heavily on generating yield for staked Liquidity Providers (LPs). We realized that in addition to arbitrageurs, many people were using vaults as a source of liquidity (i.e. buying and selling NFTs). We plan to double down on this use case by allowing such users to browse vaults and redeem specific NFTs (as opposed to random) for an added fee, which will then get routed back to LP stakers. Another way to look at this is that vault turnover will offer yield to inventory providers, similar to how AMM trading volume offers yield to liquidity providers.

A big addition that’s added in NFTX v2 is the ability to redeem specific NFTs from vaults against a small premium (5%). This allows anyone to skip the randomized process of minting/redeeming (which resulted in a lot of wasted gas if you were unlucky), and instead buy an NFT directly from the vault.

Targeted redemption starts off with a 5% premium added on top of the standard 1:1 vault token cost. For example, redeeming a specific CryptoPunk from the new CryptoPunks vault will cost the user 1.05 $PUNK.

After staking fees have been switched on by the DAO, all premiums that are collected on targeted NFT redemptions flow back to liquidity providers that stake their SLP tokens on the NFTX Stake page (see LP Staking capturing protocol fees for further info). Later, inventory providers (NFT vault depositors that do not provide liquidity on an AMM) will also have the option to single-sided stake their positions to capture protocol fees.

Currently all fees flow to the DAO treasury. Once staking fees are enabled, LPs will instead receive 100% of protocol fees, with a 90-10 or 80-20 split towards single-sided stakers happening later. The ratio on which these premiums are split between stakeholders may always be changed by the DAO at any time through a governance proposal.

A new addition to NFTX with the launch of v2 are eligibility modules, which upgrade the gas intensive allow lists procedure of v1 to bring multiple options.

Eligibility Modules now allow for anyone to allow/deny NFTs from a vault based on specific parameters, being:

A tutorial on how to configure these modules before being implemented on the front end will be available soon on our documentation page.

As noted above, liquidity providers will now gain the ability to capture protocol fees by staking their SLP (Sushiswap LP) tokens on the NFTX platform.

The breakdown of protocol fees that are rewarded back to LP stakers are:

* Mint fees will be set to 0% during the first few weeks of launch. This will allow time for users to mint and stake before rewards are turned on at a later date. The mint fee will increase to 1% for mints, with Liquidity Zaps allowing users to mint, LP and stake in a single transaction with a 0% mint fee.

Staking your SLP token on NFTX will mint a staking token that might be used as collateral on other third party DeFi platforms in the future. These tokens acquire fees generated by the protocol, claimable pro-rata to the amount of capital you have staked on the platform.

Note: Staking rewards are currently turned off. Keep an eye on our blog and Twitter account for updates on when staking rewards turn on, allowing you to capture protocol fees.

NFTX v2 vaults now include the ability for ERC20 flash loans. The motivations for building this into the contract are similar to that of Maker, who recently implemented their flash mint module.

Unlike NFTX v1, in version 2 every new vault will exist as its own contract (with its own unique address). There will still be a central “factory” contract for creating vaults.

Similar to how other DeFi protocols such as Uniswap do upgrades, our version 2 will operate alongside our version 1, which will allow for inventory to migrate slowly and at its own pace (again, there is no rush to migrate over).

We’re soft launching NFTX v2 by having created the following genesis vaults, with DAO inventory & liquidity moving over to NFTX v2 slowly, as detailed under Migrating DAO inventory to v2:

As you may note, there already exist tokens on NFTX version 1 with some of these ticker names—for example, there is a (D2) PUNK vault, and a (D1) GLYPH vault. These version 1 vaults will continue to operate as they do now, with version 2 PUNK and GLYPH tokens  being deployed at new addresses with the version 2 codebase. Tokens from version 1 will still have value, and will still be backed 1:1 by NFTs, but over time we expect the size of v1 vaults to decrease as v1 tokens get burned and the (redeemed) NFTs get used to mint v2 vault tokens.

However eventually the v1 vault is bound to become illiquid as it reaches a size of just a couple Autoglyphs and some holders don’t have enough v1 GLYPH tokens to redeem entire Autoglyphs. This concern about unwinding illiquid vaults has been present since NFTX’s inception, and there are a number of solutions which we are currently creating via contract upgrades, but which are outside the scope of this post. We want to assure readers, though, that all v1 tokens will still have value even if/when v1 vaults become illiquid, and that there is absolutely no need to migrate over to v2 quickly.

Merging a selection of vaults into one

Since NFTX v2 encourages single vaults per collection, in some cases there will only be one vault per collection on v2 where there currently exist multiple vaults on v1. For example there are currently five D1 Cryptopunk vaults on NFTX v1 (PUNK-BASIC, PUNK-FEMALE, PUNK-ATTR-4, PUNK-ATTR-5, and PUNK-ZOMBIE), whereas there will be only a single cryptopunk vault on v2 (PUNK).

Since the v2 PUNK vault will be a “floor vault”, it will be possible for any Cryptopunk to enter it (just like the current PUNK-BASIC vault). We plan for the NFTX DAO to migrate its v1 PUNK-BASIC inventory into the v2 PUNK vault. Moreover, since the prices of PUNK-FEMALE and PUNK-ATTR-4 are very similar to the floor price, we plan to also move DAO inventory from these vaults into the v2 PUNK vault. The DAO will keep PUNK-ATTR-5 and PUNK-ZOMBIE inventory in their current vaults on v1, since their prices are much higher than the floor price and migrating them to v2 comes with little benefits.

As the NFTX DAO holds multiple large inventory positions on v1, migration to v2 will happen gradually to not disturb liquidity on v1 AMM pools too abruptly. The goal however is to move most of the DAO inventory towards v2 in the upcoming weeks. Below we have outlined what and how we will transition.

DAO Liquidity that will move to v2:

The DAO aims to remove and migrate liquidity over from v1 to v2 in three to four steps, starting today and finishing by the 31st of July 2021. This is done to gradually decrease liquidity on AMMs, giving very small token holders the option to sell into available liquidity without price impact while giving the rest enough time to participate in migration.

Word of caution: If you are currently holding any of the above mentioned v1 tokens, make note of the following. While collateral of your token will always remain 1:1 backed by its respective vault NFT (i.e. one $PUNK-BASIC will always be 1 CryptoPunk), the AMM pairs for these tokens will become less liquid over the migration period. This can result in higher price slippage when selling larger amounts, resulting in potential value loss when selling a token. If you consider the slippage to be too high, we recommend waiting until the migration contracts are deployed.

How you can migrate

Migration of liquidity towards v2 is handled passively. This means that there are no pro-active steps taken by the DAO to transfer v1 Vault tokens (and its collateral) proactively to v2 for others. The DAO will, as described above, move over inventory for floor vaults over the coming 4 weeks.

When you are ready to switch your own positions from v1 to v2 to capture protocol fees, you can do so by redeeming NFTs from a v1 vault and then minting them into its applicable v2 vault.

If you need assistance in this process, do reach out to any of the NFTX team members on our Discord support channel.

Note of Caution: As the DAO will slowly migrate liquidity from v1 to v2, such as the CryptoPunks vaults, liquidity on AMMs will slowly decline for v1 tokens, increasing price impact on sales/buys.

With NFTX v2 now released on mainnet, the core team will be working on moving the protocol to a post-beta state. This includes the completion of bootstrapping all vaults, writing extensive developer documentation for third party integrators, deploying on L2/Sidechains and continuing to implement additional features such as smart orders, aggregation tools and a liquidity SDK.

That’s it for this release post! If you’re as excited as we are about what NFTX v2 will bring and want to be part of the DAO’s journey, join us on Discord!

The NFTX Bounty program rewards users that discover and properly disclose found bugs with predefined bounties. We encourage anyone to help strengthen the protocol by actively searching for bugs in NFTX contracts.

If you are a bug bounty hunter, we invite you to participate by following the guidelines on our documentation here. 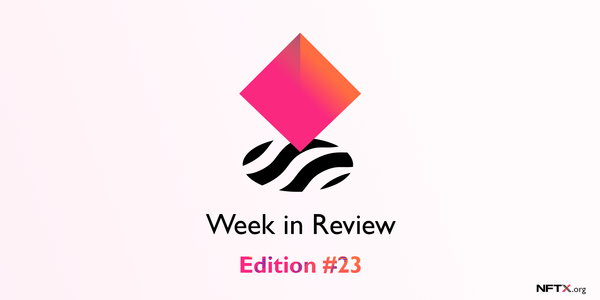 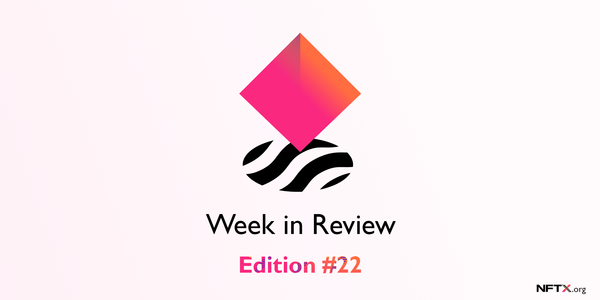